Right off the bat, and in the interest of full disclosure, I should mention that Harmony Central is owned by Gibson Brands, who (last I heard) also owns a partial interest in TASCAM. My history with TASCAM products goes way back; like most people who started recording in the '70s, I've been using their products for decades. I remember when the first TASCAM Portastudios were hitting the market in the late 1970s. They were groundbreaking units that delivered multitrack recording to the musical masses in an affordable way for the first time; combining a small mixer with a basic four track recorder, they brought together the basic tools needed for tracking, overdubbing and mixing in a relatively compact and portable unit. I spent countless hours recording songwriting demos using a TASCAM Model 246 Portastudio that I purchased back when they were first released.

Fast forward to today. DAWs are nearly everywhere, and even inexpensive computers (not to mention smartphones and tablets) allow musicians to do complex, multi-channel recordings. But some of the immediacy and responsiveness and tactile interaction with traditional hardware has been largely lost. Some musicians don't consider this to be progress since they'd rather be spending time making and listening to music rather than having to mess with computer settings and staring at a computer screen. While the latest product from TASCAM - the Model 24 under review here - doesn't totally eschew the modern approach to recording, it does bring back some of that hands-on, all in one approach that made those early Portastudios so popular, and that helped teach a generation the basics of recording and mixing…. 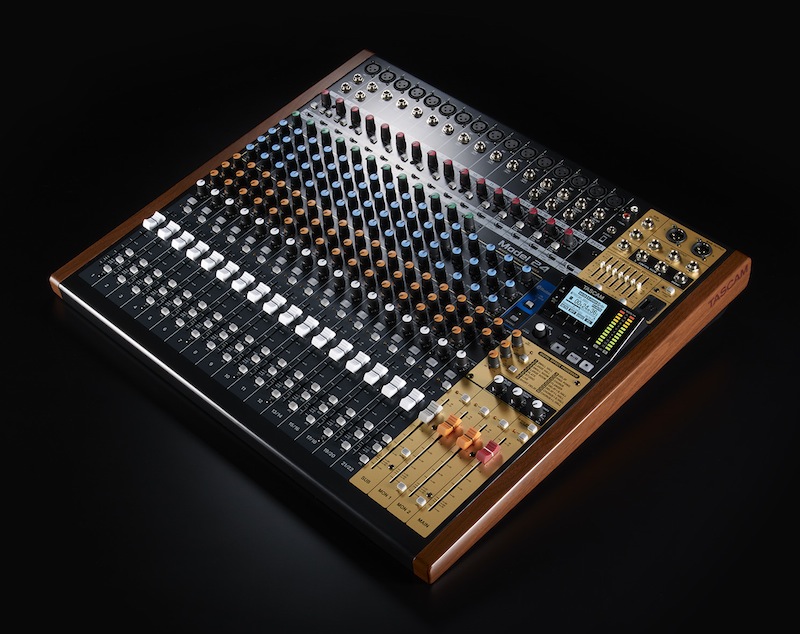 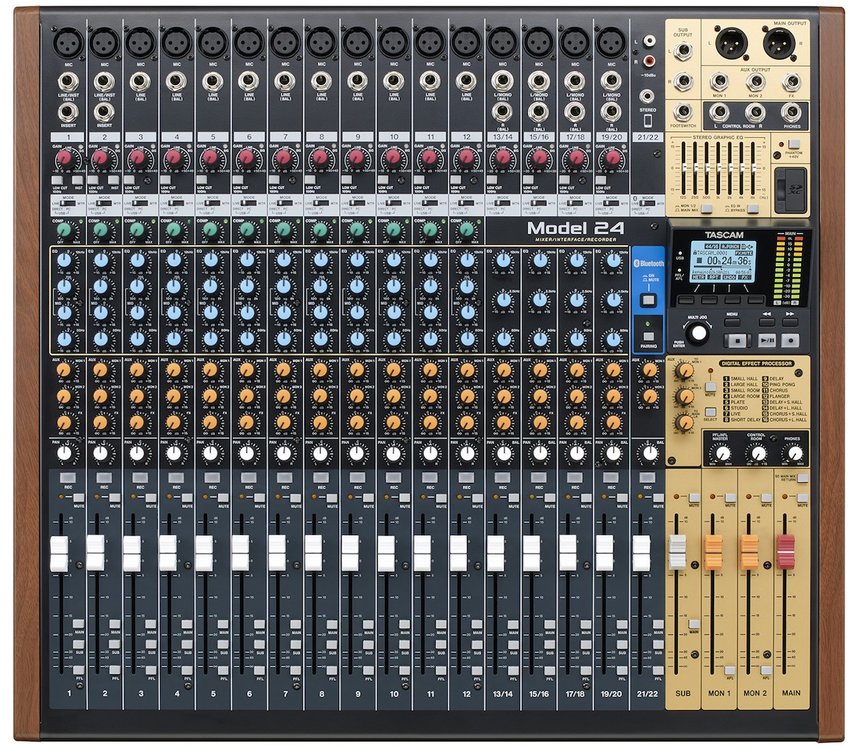 I really like the retro look of the Model 24; it takes me back to some of those early TASCAM mixers of my youth. The color coding of the various knobs isn't just retro though - it helps you to see things on the board much more easily, and yes, it looks cool too. But this isn't just an old-school analog mixer; it combines a very capable analog mixer with a modern digital multitrack SD card recorder, making it a true heir to the Portastudio legacy. Toss in a fully capable multichannel USB 2.0 computer audio interface and it's clear that modern recording capabilities were not neglected when TASCAM was designing the Model 24. And it's a very good sounding unit overall too. The mic preamps don't have as much gain as many outboard preamp models and aren't really suitable for use with most low-output ribbon mics, but they're relatively clean and neutral, without too much noise. The EQ is a very good tone shaper; it's less suitable for more surgical processing, such as notching out a 60 cycle hum, but it's great for general purpose use, and EQ is something that most audio interfaces omit entirely.

Using the Model 24 as a live mixer and being able to record the band simultaneously will appeal to many users, and it can function fine in that role as long as the amount of input channels and general connectivity and features of the board are sufficient for your needs. It's also great when serving as a modern-day Portastudio, although it would be nice if there was a way to easily transfer tracks to different channels internally or assign the first two mixer inputs to other recorder tracks without resorting to file export / import or analog track bouncing using the Sub bus. The Model 24 excels as a computer audio interface, and gives you not only a wealth of mic / line inputs (two with inserts), but also the single knob compressors and full three-band EQ - both of which are features that most other audio interfaces lack. The Model 24 offers impressive flexibility at a reasonable price. Whether you need a traditional analog mixer for live gigs, a USB 2.0 computer audio interface with lots of inputs, mic preamps compressors and equalizers for recording, or want a modern-day version of the classic Portastudio - a portable, self-contained multitrack recorder / mixer that you can take to gigs or rehearsals or use for home recording, it's got you covered.

The Model 24 would be an excellent choice not only for pro recording engineers and live sound mixers, but also for someone who seriously wanted to learn about recording and mixing audio. You get a very capable mixer that can be used for live performances, and you can simultaneously record the gig too, without having to bring a computer along. Everything is laid out before you in a logical manner - if you've ever used an analog hardware mixer or a Portastudio, you'll feel right at home in no time. Using the mixer along with the built-in multitrack recorder for recordings helps you to think a bit more like we did back in the 1970s and 1980s - you're forced to listen instead of making judgements based on what you see - which is great for ear training! It's also great for focusing on your playing chops instead of your computer editing skills. And when you do need to go to a DAW for an edit, or when you want an audio interface for your computer, the Model 24 can handle that too - no need to upgrade it or add something else to your rig. The TASCAM Model 24 really does have a nice combination of features and capabilities, and at this price (which is less than I paid for my six channel, four track TASCAM 246 Portastudio back in the 1980s), you get a lot for your money - it's bound to be a successful product for TASCAM. A lot of people are really going to love the TASCAM Model 24. I certainly have enjoyed using it. -HC-

Want to discuss the TASCAM Model 24 or have questions or comments about this review? Then head over to this thread in the Studio Trenches forum right here on Harmony Central and join the discussion!

You can purchase the TASCAM Model 24 Multitrack Live Recording Console from: